Radio communication known as RT (Radio Telephony) uses a Tx (radio transmitter) to send out radio waves of a certain frequency and a Rx (radio receiver) to receive the radio waves at the same frequency. Radio waves consist of electro-magnetic energy in specific frequency bands within the radio frequency spectrum. Frequency of waves means the number of occurrences of a wave per second. For example, marine VHF RT works in the VHF part of the marine radio frequency spectrum, which extends between 156 MHz to 174 MHz.

The wavelength of frequencies within the radio frequency spectrum is obtained by the following relationship:

The wavelength of frequencies within the VHF band is approximately 2 m. Practically this means that the length of a VHF antenna (dipole antenna) for a VHF radio need not be longer than about half this length, about 1 m, which makes VHF radio communications ideally suitable for all vessels from large passenger ships down to the smallest fishing boat or yacht.

Electro-magnetic waves of such a relatively small wavelength tend to travel or propagate in an almost straight line between Tx and Rx and only extend beyond the visible horizon (line of sight). These space waves, as they are referred to, will not pass through objects such as hills or large buildings, but may be reflected by such structures. For these reasons ,it is best to site the VHF antenna at the highest point of the vessel in order to obtain the greatest communication range.

The range of VHF radio communications (distance from antenna to the visible horizon) is calculated by the following formula (the symbol √ stands for square root):

When calculating the range between two antennas, the range of both antennas have to be taken in consideration. The formula is following: 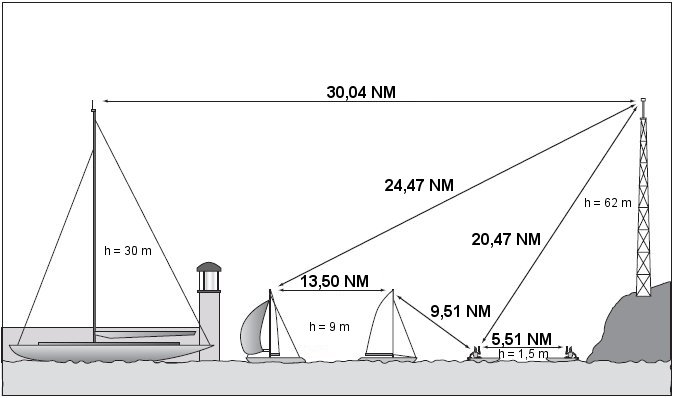 The range of VHF radio communications at sea may vary greatly between different types of vessel and between different types of vessel and CRS. This is due to the varying heights of antennas ( h ) in use dependent on the size of vessels and locations of CRS. In normal radio conditions the expected radio communication range at VHF will normally be expected to be between 20 to 30 NM.