A VHF RT radio is a transmitting-receiving system often referred to as a Transceiver (Tx/Rx), which allows the operator to either transmit or receive information by voice. It can be fixed or handheld.

One of the greater disadvantage of VHF RT radio is that it is not able to "address" to a particular VHF radio. A voice broadcasted over VHF RT radio can be heard by all other VHF radios in the range.

Because of that, VHF radios integrates VHF DSC Controller. Its function can be regarded as a cross between a normal telephone and a VHF RT radio. The DSC functions via the DSC Controller or Modem, which simply sends a burst of digital code on the VHF CH 70, will automatically “ring” another VHF radio. This is feasible because each VHF DSC Controller has allocated unique MMSI number that acts like telephone number. Only fixed version of VHF radios are available. 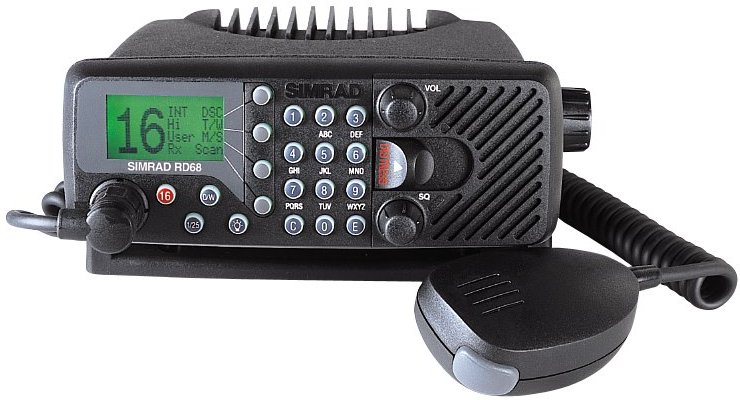 The main components of a VHF radio consist of:

The VHF radio must be sited:
Usually is sited in the cabin of small vessel or on the bridge of larger vessels. A waterproof extension speaker sited close to the steering position is reccomended that allows the person on watch to monitor also the VHF radio.

The VHF antenna should be fitted at the highest point of a vessel to get the greatest possible radio range, for example to the masthead of a sailing vessel. An emergency VHF antenna is recommended to be carried because accidents can happen that could lead to the loss of the VHF antenna.

It is fully recommended to link the VHF radio to an external navigation source, for example GPS or chartplotter. This way a VHF radio can acquire the position and time. This is very important in distress situation as it is explained in details in next chapters.

A handheld VHF radio is usually used as a backup to a fixed one, for intership communications on large vessels and for use in life raft, because it is a completely self contained unit.